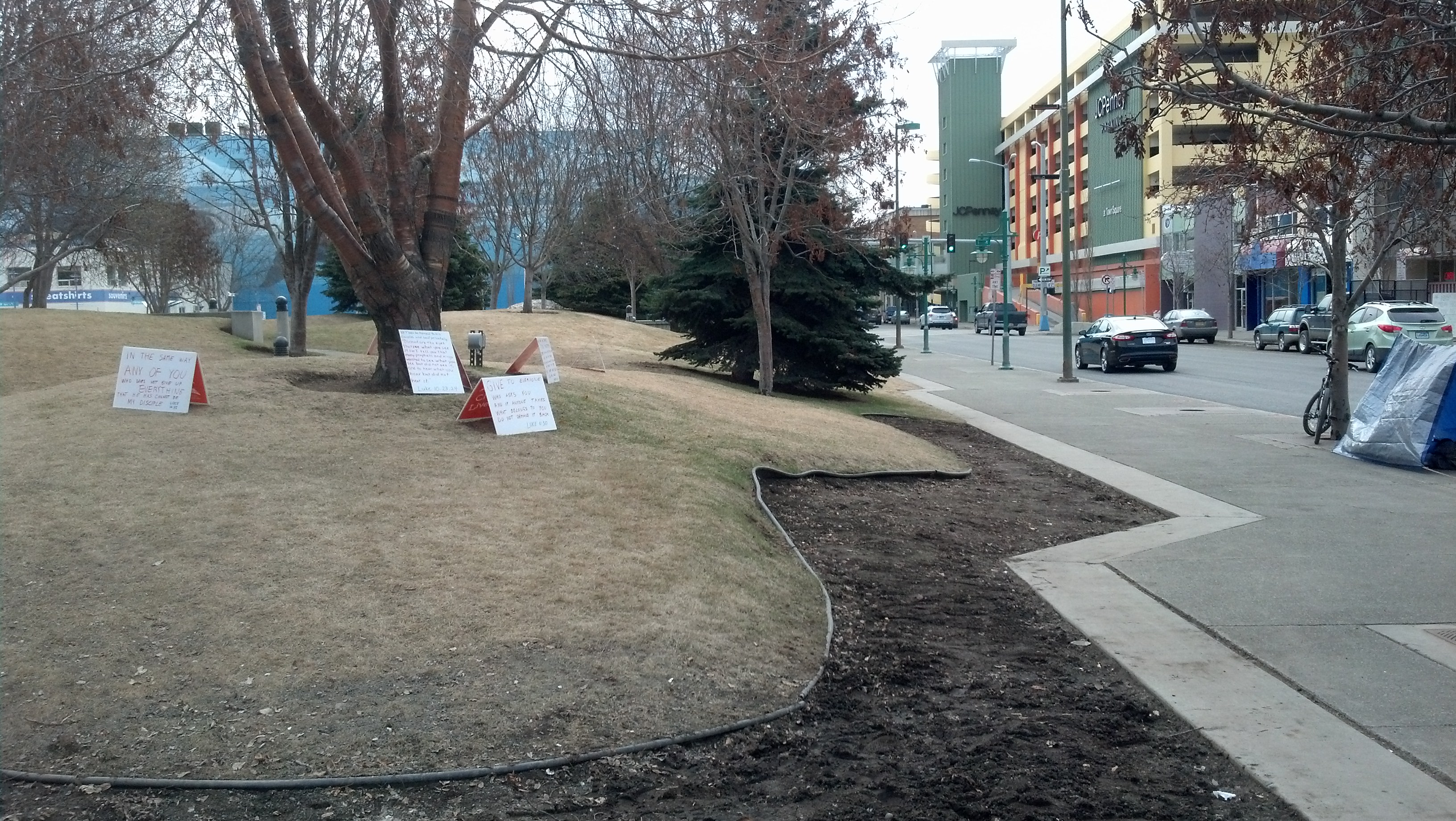 Some rain fell during the night, then let off in the morning, then resumed again in the afternoon. The tarp is fine to stay dry in a light rain, but wouldn’t withstand a downpour. Also, it’s wide open at the ends. I’m starting to call it the “Wind Tunnel”.

I preached several times today, since it is Sunday, starting at nine in the morning, and continuing every hour, on the hour, through noon. I eased off in the afternoon as the rain started to fall, but did call my mom to wish her a happy Mother’s Day, talked her through setting up her tablet for USB tethering, and let several other people call their mothers on my phone. I also put up signs that read “Free Bike Rides” and “Free Bike Rides, Phone Calls, Food”.

The bike disappeared while I went into the mall to use the toilet. 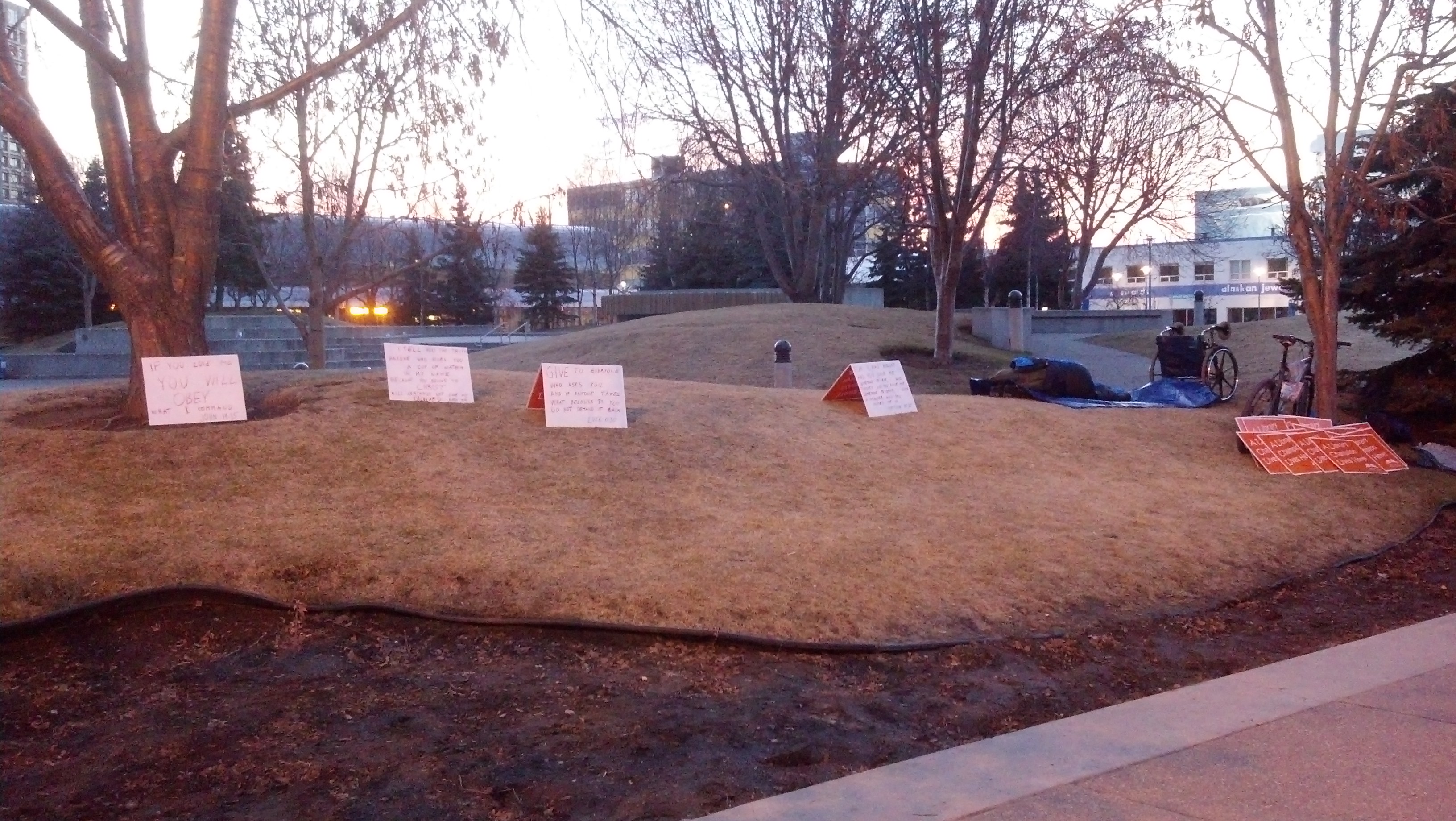 Day 0 started rough, but God worked through it all. I packed up my campsite near the university, piled everything into a shopping cart around noon, and pushed it across town to New Hope, a local church that’s been providing space for John Martin’s Community Support Group on weekday afternoons. An old man came in; we provided him with clean clothes, some food, and I let him lie down to rest with my blanket to cover him and my rolled up sleeping bag as his pillow. I was the only person cleaning up, and when I was done, I woke him, then went upstairs to help carry a coffee maker downstairs for an evening meeting. When I returned, the old man was gone, along with my blanket and bag!

I left a suitcase and the shopping cart at church, started heading downtown at around 6 PM, saw him on Delany Park strip, walked over to him and he talked to me like trash!

Not even a thank you for the bag. I lugged the rest of my stuff over to Town Square, dropped it all down, and started to cry. Why am I doing this? I’m broke; I’m homeless; I have no sleeping gear, now. Is this really what God wants?

I started thumbing through my Bible, and came to Luke 6:30: “Give to everyone who asks you and if anyone takes what belongs to you, do not demand it back.” Well, I said to myself, that’s what I just did!

So I took out magic markers, wrote that passage on two signs, taped them together and set them up: 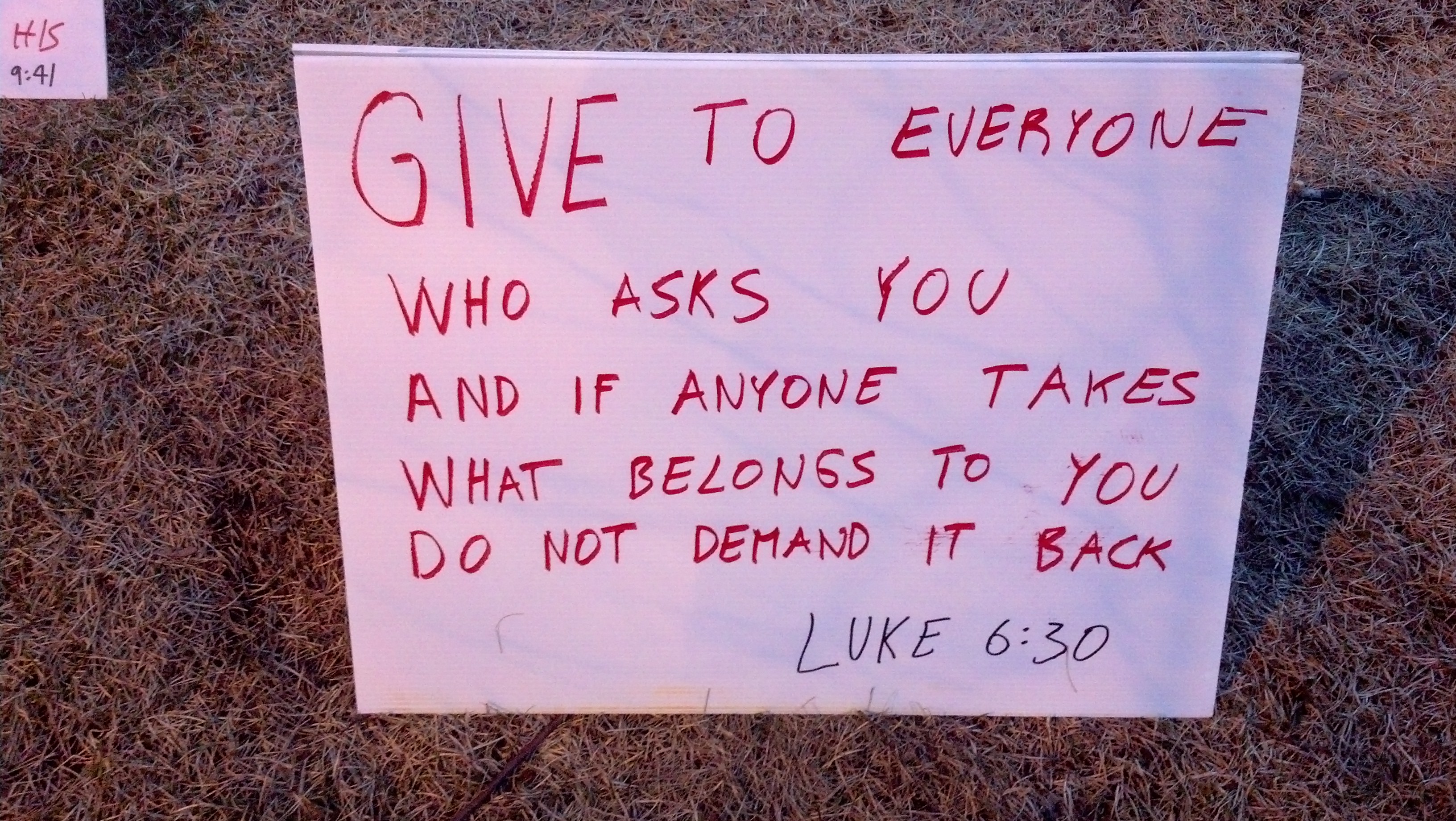 Then I started begging God again to provide me warmth to sleep that night. A friend of mine texted me and I called him back and told him what had happened. Even though he was pretty tired, he said that he’d buy a sleeping bag at Wal-Mart and bring it over.

That inspired me to write a second sign, Matthew 25:35: 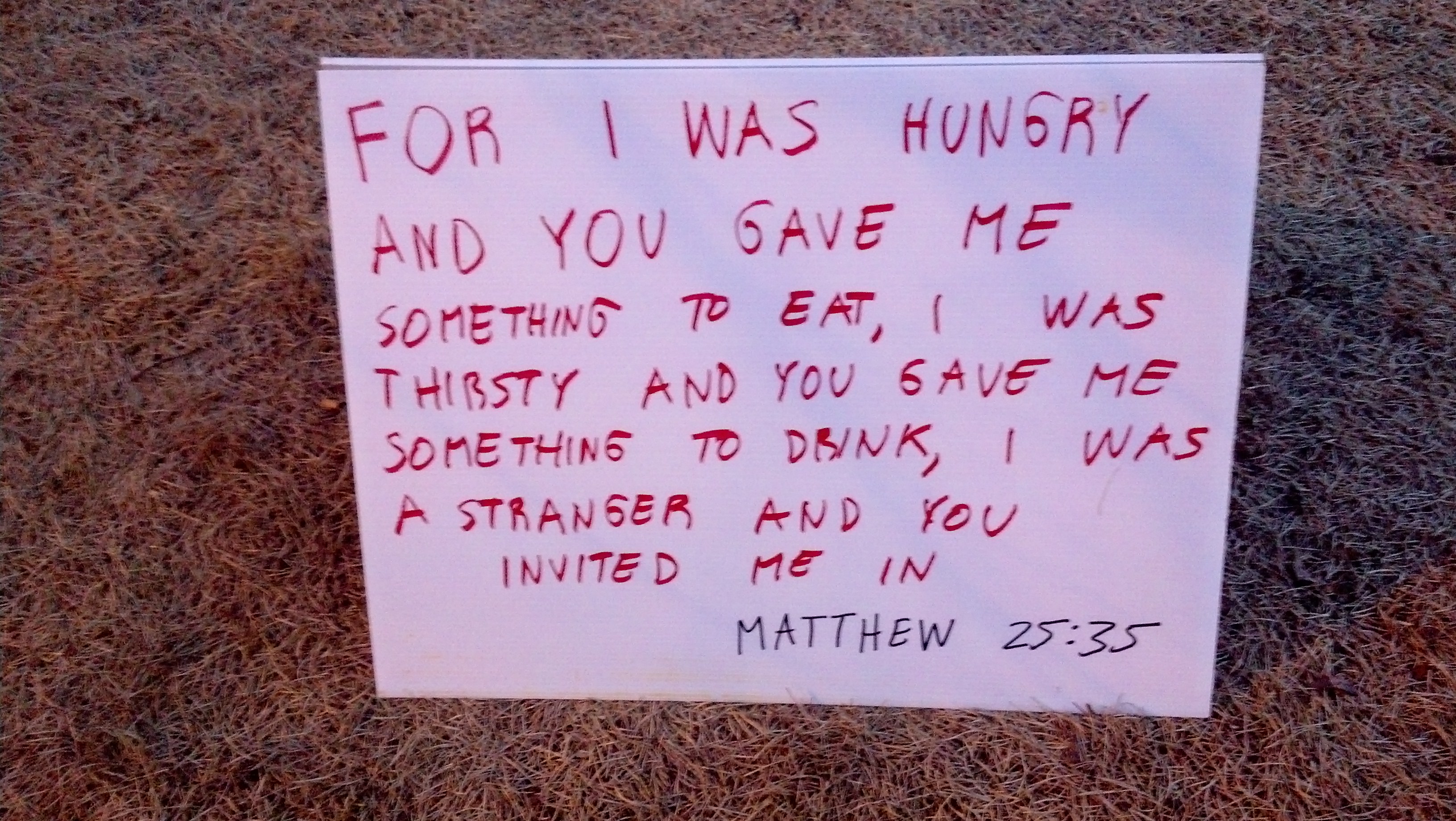 I was part way into a third sign when John Martin showed up, and by the time my friend got there with a sleeping bag and a tarp I was able to introduce them. Then I finished the third sign: 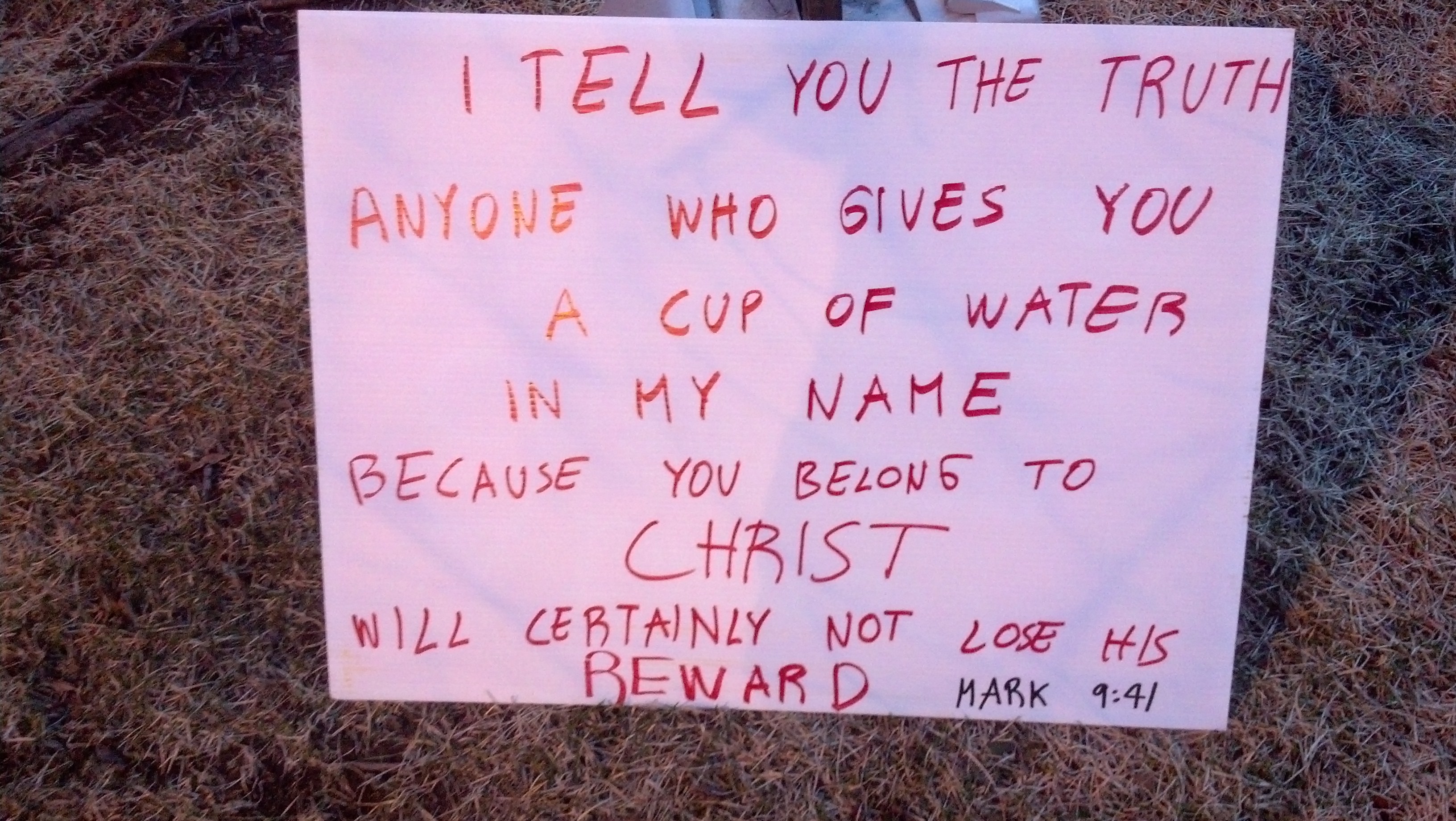 Finally, I added a fourth sign to explain why we were doing all of this and now I had one from each Gospel: 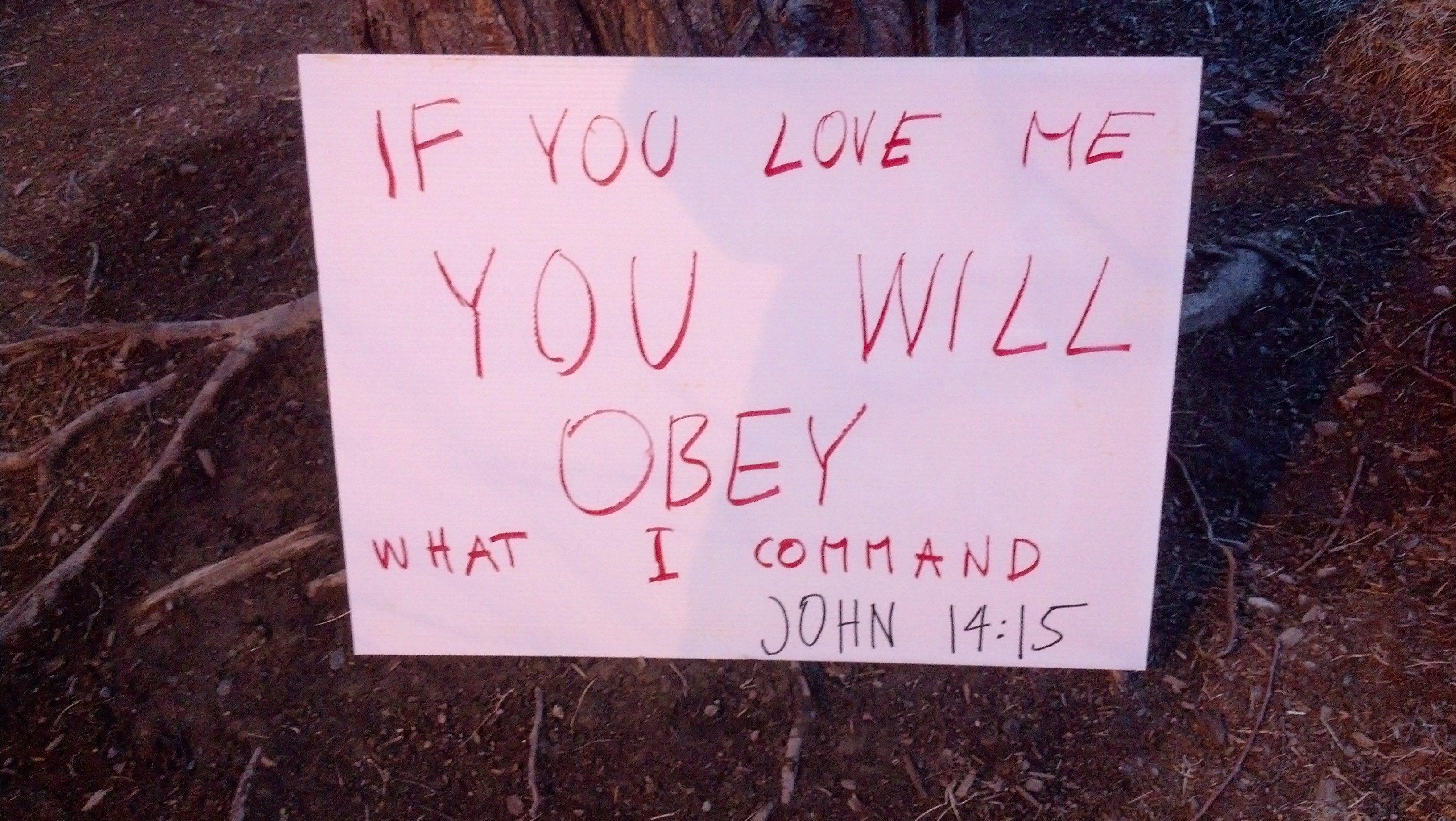 My first interaction with the police came around midnight. John was still there, which was great, and the exchange was very cordial. I basically preached a brief sermon, explaining to the police officer why I was there.

This text will be replaced

John left soon after the police did, but quickly returned with a deaf mute in a wheelchair. We could only communicate with him by writing, but it was clear that he had no place to go, so I let him sleep at the site.

He got the sleeping bag.